So the USDA is pushing American Chickens to China to be processed and returned for human consumption? Oh my god no. What could possibly go wrong? The U.S. Department of Agriculture has recently approved four chicken processing plants in China. What is actually happening is quite scary. Chickens will be raised and slaughtered here in the United States and then exported to China for processing and returned back to America for us to feed our family with. 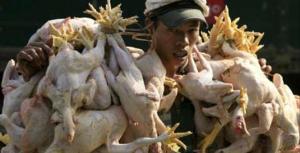 Scarier still the imported poultry will not require a country of origin label and US health inspectors will NOT be on site at Chinese processing plants inspecting the processes. It will ship back to us to consume on the Chinese honor system.Food experts do worry about the quality of meat being processed in a Country known for many food-borne illnesses and avian bird flu. Many experts also feel this may be just a bridge to eventually loosen export rules to enable China to raise and slaughter the chickens domestically as well.

Tom Super, spokesman for the National Chicken Council says “Economically, it doesn’t make much sense,”. “Think about it: A Chinese company would have to purchase frozen chicken in the U.S., pay to ship it 7,000 miles, unload it, transport it to a processing plant, unpack it, cut it up, process/cook it, freeze it, repack it, transport it back to a port, then ship it another 7,000 miles. I don’t know how anyone could make a profit doing that.”

Going by the Bureau of Labor Statistics data it has been estimated that American poultry processors are paid roughly $11 per hour.

It has also been reported that China’s chicken workers often make between $1 to 2 dollars per hour. While this does negate Supers assessment somewhat, China is the last place I want my raw poultry to be processed. Just check the Wiki in relation to Food Safety incidents in China. And another bottom line to remember is that not only Chickens are being exported here, American jobs go along with the birds  as well. Oh, and a few corporations can fatten their quarterly statements as well.