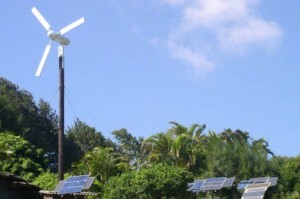 So, you’ve thought about whether or not living off the grid is right for you; you know that it means no more utility bills and generating all of your own power, but what’s involved in that? It isn’t as easy as slapping a few solar panels on the roof and calling it good; when it comes to generating off grid power, there are a handful of methods that can combine to generate all the energy you’ll need to live comfortably off the grid.Plug in to off grid power with solar electricity
Solar power is probably the one that jumps to mind for most of us when it comes to off-grid energy. The sun-powered option, which includes photovoltaic solar panels, an inverter and batteries, can provide lots of electric power (especially if you get a lot of solar exposure where you live) for a long time, without any moving parts and a little maintenance. The downside, at least for now, is the cost: it is rarely cost-effective to power an entire home entirely with solar, even allowing for several decades for a positive return on the investment. Add to that the wide variance of solar exposure by location (see the map for an example) and the fact that solar only works when the sun is shining, and it’s easy to see why solar remains a part of the answer, and not the whole thing.

Generating off-grid power with wind electricity
If you get good news after you contact your local weather service to check on the average wind speed in your area, generating electricity from residential-sized wind turbines is another option for off-grid energy. Knowing the average and wind speed ranges, you can estimate how much electricity a given system will produce. Keep in mind, wind speeds on a specific lot can vary significantly from regional averages depending on local topography.

When it comes to picking a turbine, size matters. A 400-watt wind turbine, big enough to account for a few appliances, uses about a four-foot-diameter rotor; a 900-watt turbine uses a seven-foot turbine; a 10,000-watt (10 kW) turbine, enough to power most or all of a house, uses a 23-foot turbine and is mounted on a tower often more than 100 feet tall. Obviously, living in town or on a small plot, the big one isn’t going to work as well, but many people have the necessary real estate for an extra seven-foot turbine.

As with solar, there are pluses and minuses to going with wind energy off the grid; the biggest, most obvious one is the need for breeze: if the wind doesn’t blow, the turbine stays still and the electricity isn’t generated. Wind turbines also have moving parts, which means more things that require maintenance and have the possibility of failure. But if you’ve got a good consistent stiff breeze blowing through the back yard, you can harvest its energy for years to come.

Microhydro electricity generation can be the most cost effective of the three, according to Energy Alternatives Ltd., “Our experience with micro hydro systems has demonstrated that water power will produce between 10 and 100 times more power than PV or wind for the same capital investment.” If your source is good, it runs 24 hours a day, 7 days a week, providing lots of off-grid energy for a long, long time; because it produces so much more consistent energy, fewer batteries are needed to store the energy because there is less (or zero) time that the system isn’t harvesting energy. Of course, as with the other two, it requires pretty specific on-site conditions; if you don’t have a stream in the backyard, you can’t use microhydro.

Conservation: addition by subtraction
Even though this doesn’t technically generate electricity or transfer energy, we have to mention this; as was noted previously, one dollar worth of energy conservation can save three to five dollars in energy generation equipment costs; if you can use what you have more efficiently, there’s no reason to spend more to make more. While designing for efficiency is the best way to achieve high levels of energy conservation, there are lots of retrofits in insulation and efficiency upgrades that can help cut back on demand.