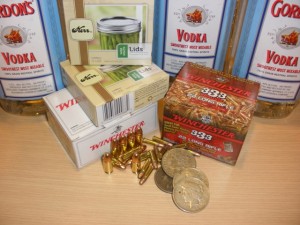 They say that money makes the world go around, but what would happen if a major crisis made all of the pretty paper in your wallet worthless overnight? We fool ourselves into believing that we are safe as long as we have X amount of money in reserve, but that safety net is made of paper, which is not the strongest material in the world. In the event that paper money became useless, sustainable goods would almost instantly start to rise in value and would become what we would use for trade. Being able to survive in the new world without money would mean having access to the items that keep us alive. The items that we take for granted today might well become the new currency of tomorrow, so perhaps it’s time to do a little hoarding. Let’s take a look at 10 items that may save your life in a moneyless world.

Seeds – We mentioned in #4 how having a garden could prove to be beneficial, but you need seeds to make that garden grow. A healthy supply of heirloom seeds is a great investment to make, as you can use them to grow your own stuff and as trade in a barter system.

Survival gear – Included in the list of items like knives and warm clothing are many of the camping essentials that we use when we want to get back to nature a little. That family tent may well become an affordable home for someone in the future.

Water – While water may be one of the most plentiful resources at our disposal, a good portion of it is not fit for human consumption. Having a working well or some other source of fresh, clean water on your land would be the equivalent of having the license to print money in today’s world. You need only look at what happens in the event of a natural disaster to see how water quickly becomes the first thing to vanish off the shelves in local stores. It is recommended that every American have at least a 3-day supply of fresh water on hand at all times, yet only 53% can claim to do so.

Medical supplies – This is another in the list that we should all have on hand for ourselves, but which also having extra of could mean having something of real value to trade. What’s a little alarming is that as few as 44% of Americans have a first aid kit in the home at this time.

Precious materials – While most of us are happy to wear gold, silver, and precious stones as jewelry, very few think about how those trinkets could become immensely valuable in a crisis. Items that may be worth a few bucks today might very well skyrocket in such a scenario. This doesn’t mean that you need to start stockpiling gold and silver, but having a little investment in each may not be a bad idea.

Food – Water can only carry you so far, as we all need food for energy and nutrition. As well as having a good supply of canned goods on hand, you might also consider creating a garden filled with vegetables. Bulk foods such as grains and rice are also good items to have in stock. Chickens are also a great idea, as they will provide you with both eggs and meat if necessary. By the same token, goats can be an excellent source of milk, with all of the aforementioned items likely to be in high demand.

Alcohol – While booze may appear to be one of the things that would be considered a luxury, it does in fact have purposes other than making you forget about all the bad stuff going on outside your front door. Alcohol can be used to sterilize wounds, and may be a good substitute for those without that first aid kit.

Cigarettes – Playing to people addiction in exchange for other goods. Additionally, this is something that people turn to in times of high stress. Nothing wrong with having a carton or two, just make sure your teenagers don’t know about them.

Gas – In the event of a major crisis, there is always the possibility that electricity may go by the wayside. If that were to happen, gasoline, propane, and items used for lighting, heating, and cooking would become very high in value. Gasoline only has a finite lifespan, which means that oil and propane may very well be your best options for storing.

Skills and knowledge – The ability to be able to adapt and survive in the new world is something that can very much be taught. If you have experience in engineering, construction, or a trade that would be considered invaluable, you have a marketable skill that many will be willing to pay a high price for. Americans have become a little too comfortable in believing that the government will be there to help when disaster strikes, but that is not something that can be counted on. A little knowledge can go a long way when trying to survive an emergency situation.

Ammo – Having gunpowder and ammo on hand for personal protection may be essential in a future without money, but it will also be good for trade. This is especially true if you are able to make your own ammo.