Though there are many different methods of preparing meat for long-term storage, without a doubt, canning it is the easiest way to store large quantities of it in a manner that gives you an almost eternal shelf life.

Canning meat off grid is pretty much the same as if you do it in the modern fashion; as a matter of fact, if you have solar power, you can probably use the same methods that everybody else does.

It used to be considered safe to simply can your meat in boiling water baths but that’s not the case anymore. If you’re near sea-level where the boiling point of water is the highest, you MAY be OK to can your meat using the water bath method as long as you keep it at a hard boil for at least three hours. Even then, there’s no assurance that it will be safe to eat though our older generations did it and seemed to fair ok.

The recommended method of canning meat (and low-acid vegetables) is to use a pressure canner. This is because of the high risk of botulism. Botulism is a type of food poisoning that can quite literally kill you if you get it.

It affects your central nervous system and causes facial and/or body paralysis, difficulty breathing and swallowing and other not-so-pleasant reactions. Needless to say, if you can’t breathe, you’re going to be in a bit of trouble.

Botulism is caused by the bacteria Clostridium botulinum. This bacteria is extremely difficult to kill with the average heat that is used in water bath canning and can live without oxygen in your jars. As a matter of fact, it produces oxygen, which is why you should throw out any canned foods that have bulging lids or bubbles or foam on the top or up the sides when you look at the jar.

We’ve gotten a bit astray, but I wanted to really drive home why it’s critical to can your meat using a pressure canner instead of using a water bath. Now we can proceed with the actual methods of canning meat off-grid. 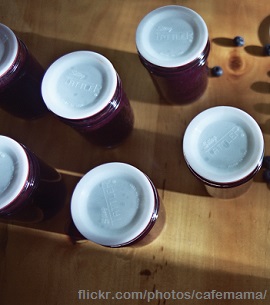 In order to can any type of food, including meat, you’re going to need glass jars, lids and rings. The problem that many off-grid people will face in the event of a disaster is that the jars and rings can be reused but the lids can’t. Or at least MOST of them can’t.

There are now a couple of companies that make lids that can be reused almost endlessly, so even if they cost a bit more, they’ll pay for themselves many times over. The reusable lids that I’ve used are Tattler brand. The second good thing about them is that they’re BPA-free.

When using these lids though, there are a couple of differences between them and the standard lids that you’re probably used to. When you put the lids and rings on the jar, you need to unscrew the lids a quarter of a turn in order to allow the hot air to escape while the contents are processing. Once the jars of food are processed,  remove them from the canner. As soon as you do this, tighten the rings back down so that the rubber can seal correctly as the food cools.

When it comes to reusing your jars, always make sure that you thoroughly clean them and inspect them for any flaws. If there is even the slightest chip anywhere, especially along the mouth, then use it to store your dry goods or other items that don’t require a seal.

Canning without a Stove

This is where it’s going to get a bit tricky. If you have an old-fashioned wood-burning cook stove then you’re in a much better position to can foods, especially if you’re pressure-canning them. Remember one thing though – if you’re without power, that means that you’re without air conditioning so canning inside is going to turn your house into an oven in the middle of the summer.

Though many people say that pressure canning over an open fire is impossible, it’s really not. That’s not to say it’s easy because it’s not, but it IS possible. You’re going to need A LOT of wood because you’re going to need to keep your fire hot enough to sustain the pressure inside of the canner.

If the water quits boiling for even a bit, you’ve already lost because the meat needs to stay under pressure for the amount of time necessary (it will vary based on the size of your jars) in order to kill botulinum bacteria. 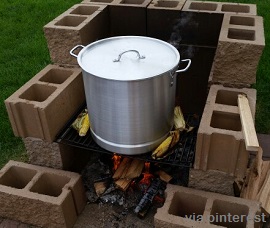 Here’s how I’ve seen my mom do it (she’s really a homesteading gal!). She built her own outdoor grill using cinder blocks. Her canning side was surrounded by three sides by cinder blocks and her grate was placed at the top of two blocks, so that the canner was pretty close to the fire.

You want to start with a really hot fire; your canner will pressurize much faster that way. Also, have a big supply of wood handy; remember that if you’re canning multiple batches, this is going to turn into an all-day (or even all week) job. Green beans need to process under pressure for about 25 minutes if you’re using quart jars. Quart jars of meat needs 90 minutes of processing!

Your canner can only hold so many jars, so if you’re doing multiple batches, prepare to have enough wood to keep that fire hot for several hours. You’re going to have to watch your fire closely. You want it hot enough to bring the pot to pressure but not so hot that you blow it up!

Another good tip that I read from somebody else was that if you’re sterilizing your jars outside, put a lid over the pot; otherwise ashes will get in the water. The last thing that you want to do is add extra work to an already excruciatingly long process!

Be extremely careful when you’re canning over an open fire. It may be best to start with some water bath canning so that you can get a feel for how much wood it takes to keep the water boiling but not overflowing, etc. Then after you get a better feel for the process, move up to pressure canning.

Just because you don’t have electricity doesn’t mean that you’re unable to can your foods. Oh, and one final tip that my mom taught me when I was a kid and we were camping: if you put dish soap on the outside of your pots when you use them over an open flame, the black soot will come off much easier! Don’t you just love tips from mom?

This is a fairly new topic in the world of off-grid living so if you have any comments or experiences to share, please do so in the comments section below!

4 thoughts on “The Easy Way To Canning Meat Off Grid”