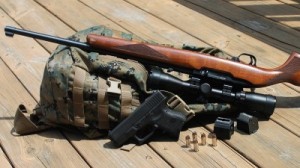 Any survivalist or prepper wishes he could have all the guns and ammunition in the world, but in this economy, people on tight budgets have to be more selective.

When it comes down to it, the guns you need can be divided into first tier, second tier and third tier. First tier are the most critical guns — without question. Second tier are the guns you need and should be proficient with, but only after you’ve bought and become proficient with first tier guns. Third tier guns are firearms that would be nice to own, but that aren’t nearly as critical as first and second tier.

For now, we will discuss the first tier guns and the reasoning for owning them. All of the roles that you would need a gun for are fulfilled by these three categories.

As always, you should invest in ammunition for these guns both to become proficient with them and to have adequate stocks in storage.

Many have expressed concern at the rise in price of .22 rounds on the market lately, but in recent months, rounds have become more and more available. The .22 is an enduring and versatile little round. It’s quiet, has extremely low recoil, and can do more than most people give it credit for. But the biggest plus for the .22 is how much ammo you can store. You can easily store hundreds, if not thousands, of rounds of .22 in a box that otherwise could have only fit far fewer rounds of a rifle or handgun caliber. Many .22s are sold in boxes called bricks that contain up to 5,000 rounds of ammunition.

You’ll want to go with a semi-automatic .22 with a high capacity. There are an abundance of AR-style .22 rifles on the market that will catch some eyes, but your best bet here is to go with the Ruger 10/22 or the Marlin 60. Both are very popular and reputable; the primary difference is that the Ruger is magazine-fed, whereas the Marlin is tube-fed.  Ultimately, it comes down to your personal preference.

Specifically, you’ll want a pump-action field combo kit. A field combo kit is a shotgun that comes with two, easily interchangeable barrels: an 18.5-inch for self-defense and a 28-inch vented rib for hunting. This makes the shotgun extremely versatile by essentially giving you a two-in-one package. Pump actions are also reliable as they can feed nearly any kind of shell that you put through them.

Field combo kits are available from Mossberg and Remington, among other companies. The Mossberg 500/590 series and the Remington 870 are the go-to option for pump-action shotguns due to their fair pricing, popularity, reputation and availability of parts.

Last but not least, the third gun on the first tier list is the 9mm semi-automatic pistol. The 9mm is plentiful, affordable and versatile. There is a nearly infinite number of 9mm pistols on the market, but since we’re narrowing our priorities here, go with a high capacity, mid-sized pistol that can be adequately concealed on your person, can serve as a large enough sidearm to fight with, and feels comfortable in your hand. Buy a minimum of six magazines for your pistol.