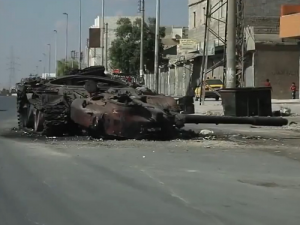 As we speak, the most decisive battle in the Syrian Civil War is being waged, and it’s a make or break moment for the Assad regime, and for Putin. Forces allied with the Syrian Army such as Hezbollah and the Iranian Revolutionary Guard, have surrounded Aleppo, a hotly contested rebel stronghold and previously the largest city in the country. Thousands of civilians are fleeing the city en masse as these forces close in, while the Russian Air Force pummels the area day and night.

If the Syrian government takes the city back, it will be a devastating blow for any rebel forces in the country, ISIS or otherwise. It will be marked in history as a major turning point for Assad and the Kremlin, and a massive rebuke to the demands of the United States and her allies.

As for those allies, they may not be willing to take this defeat sitting down. Under the guise of fighting ISIS, Saudi Arabia has announced that they intend to put boots on the ground in Syria, if the US agrees to it.

“Today, the Saudi kingdom announced its readiness to participate with ground troops with the US-led coalition against ISIL, because we now have the experience in Yemen,” Brigadier General Ahmed Asseri told Al Jazeera.

“We know that air strikes cannot be enough and that a ground operation is needed. We need to combine both to achieve better results on the ground.”

Asseri didn’t elaborate on how many soldiers the kingdom could send.

The Iranians didn’t seem too amused by this announcement, and not just because they are bitter rivals with a regime that has provided material support to the Syrian rebels. Iranian general Ali Jafari replied to this call to arms, by explaining that the Saudi military is too conventional to deal with an irregular fighting force like ISIS, before adding “This will be like a coup de grace for them. Apparently, they see no other way but this, and if this is the case, then their fate is sealed.”

But Saudi Arabia may not be the only anti-Assad country to join the fray, at least if the Russians can be believed. They claim that Turkey, which has long been accused of supporting ISIS, may be preparing to invade the country.

MOSCOW — Russia has serious grounds to suspect Turkey of preparing for a military incursion in Syria, where Russian jets are bombing rebel and jihadi fighters, Defense Ministry spokesman Igor Konashenkov said on Thursday.

“The Russian Defense Ministry registers a growing number of signs of hidden preparation of the Turkish armed forces for active actions on the territory of Syria,” he said in a statement.

The ministry also hit out at Turkey’s refusal to allow Russia to make an observation in early February over Turkish areas adjacent to Syria, saying “no specific explanation” was given by Ankara.

“The Russian Defense Ministry regards these actions of the Turkish party as a dangerous precedent and an attempt to hide the illegal military activity near the Syrian border,” it said.

Now that it appears the rebels are about to be faced with a crippling blow, delivered by a coalition of nations that are determined to snuff them out, it seems that the rebel’s benefactors are preparing for one final push to save their war against Assad. Which means that before this war is over, there may be a massive escalation of tensions on the part of all parties involved. The US is certainly playing a role in this escalation.

On Wednesday, the FSA’s Northern Division, one of the 39 anti-Assad militias backed by the CIA, uploaded a video showing one of its soldiers firing a TOW missile at half a dozen or so unidentified uniformed men gathered on a rooftop of a building. The video, uploaded at 5:57 GMT, named the targets as Russian officers but gave no details about the exact location of the attack apart from noting that it was somewhere near Syria’s coast—the region of the country where Russia has recently constructed forward operating bases and airfields. There was little doubt that whoever was on that roof didn’t survive the resulting blast.

About an hour later, Russia’s state-owned TASS news agency reported that a Russian officer who had been advising the Assad’s army had indeed been killed in Syria—not by U.S.-backed rebels but by ISIS, which allegedly hit a military garrison with mortars on Monday. No location for this attack was given.

The Russians won’t admit it, but the evidence suggests that the rebels killed several Russian and Syrian military officers with an American made TOW missile. The reason why that is so important, is because whenever the US gives weapons to any nation or group, they come with strict stipulations. They have rules about how they’re allowed to use these weapons and who they’re allowed to kill with them. So in all likelihood, the US government just gave these rebels explicit permission to target Russian forces.

With that said, this war has already touched base with World War Three on several occasions. It’s probably the most dangerous war being fought in the world today, due to how many entangling alliances are involved. Now that a decisive moment in this conflict is upon us, and every nation that’s involved is escalating their presence, there will likely be plenty of close calls in the near future.