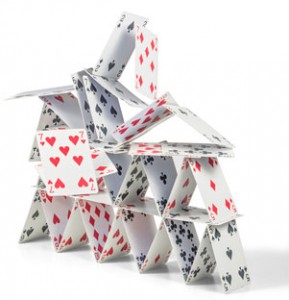 This article was originally published by Michael Snyder on his Economic Collapse blog.

Editor’s Note: While the insanely falling oil prices are giving a temporary moment of glee to consumers at the pump, it is already unleashing economic consequences to numerous regimes that have relied upon high oil prices; now it threatens to also destroy shale gas producers and unravel the massive and nearly unquantifiable derivatives market – a ticking time bomb disaster of apocalyptic proportions that was avoided in 2008 only through the problematic and criminal “too big to fail” philosophy that has allowed banks to keep on looting while holding the taxpayers of this country hostage.

Could rapidly falling oil prices trigger a nightmare scenario for the commodity derivatives market?  The big Wall Street banks did not expect plunging home prices to cause a mortgage-backed securities implosion back in 2008, and their models did not anticipate a decline in the price of oil by more than 40 dollars in less than six months this time either.  If the price of oil stays at this level or goes down even more, someone out there is going to have to absorb some absolutely massive losses.  In some cases, the losses will be absorbed by oil producers, but many of the big players in the industry have already locked in high prices for their oil next year through derivatives contracts.  The companies enter into these derivatives contracts for a couple of reasons.  Number one, many lenders do not want to give them any money unless they can show that they have locked in a price for their oil that is higher than the cost of production.  Secondly, derivatives contracts protect the profits of oil producers from dramatic swings in the marketplace.  These dramatic swings rarely happen, but when they do they can be absolutely crippling.  So the oil companies that have locked in high prices for their oil in 2015 and 2016 are feeling pretty good right about now.  But who is on the other end of those contracts?  In many cases, it is the big Wall Street banks, and if the price of oil does not rebound substantially they could be facing absolutely colossal losses.

It has been estimated that the six largest “too big to fail” banks control $3.9 trillion in commodity derivatives contracts.  And a very large chunk of that amount is made up of oil derivatives.

By the middle of next year, we could be facing a situation where many of these oil producers have locked in a price of 90 or 100 dollars a barrel on their oil but the price has fallen to about 50 dollars a barrel.

In such a case, the losses for those on the wrong end of the derivatives contracts would be astronomical.

At this point, some of the biggest players in the shale oil industry have already locked in high prices for most of their oil for the coming year.  The following is an excerpt from a recent article by Ambrose Evans-Pritchard…

US producers have locked in higher prices through derivatives contracts. Noble Energy and Devon Energy have both hedged over three-quarters of their output for 2015.

Pioneer Natural Resources said it has options through 2016 covering two- thirds of its likely production.

So they are protected to a very large degree.  It is those that are on the losing end of those contracts that are going to get burned.

Of course not all shale oil producers protected themselves.  Those that didn’t are in danger of going under.

For example, Continental Resources cashed out approximately 4 billion dollars in hedges about a month ago in a gamble that oil prices would go back up.  Instead, they just kept falling, so now this company is likely headed for some rough financial times…

Continental Resources (CLR.N), the pioneering U.S. driller that bet big on North Dakota’s Bakken shale patch when its rivals were looking abroad, is once again flying in the face of convention: cashing out some $4 billion worth of hedges in a huge gamble that oil prices will rebound.

Late on Tuesday, the company run by Harold Hamm, the Oklahoma wildcatter who once sued OPEC, said it had opted to take profits on more than 31 million barrels worth of U.S. and Brent crude oil hedges for 2015 and 2016, plus as much as 8 million barrels’ worth of outstanding positions over the rest of 2014, netting a $433 million extra profit for the fourth quarter. Based on its third quarter production of about 128,000 barrels per day (bpd) of crude, its hedges for next year would have covered nearly two-thirds of its oil production.

When things are nice and stable, the derivatives marketplace works quite well most of the time.

But when there is a “black swan event” such as a dramatic swing in the price of oil, it can create really big winners and really big losers.

And no matter how complicated these derivatives become, and no matter how many times you transfer risk, you can never make these bets truly safe.  The following is from a recent article by Charles Hugh Smith…

Financialization is always based on the presumption that risk can be cancelled out by hedging bets made with counterparties. This sounds appealing, but as I have noted many times, risk cannot be disappeared, it can only be masked or transferred to others.

Relying on counterparties to pay out cannot make risk vanish; it only masks the risk of default by transferring the risk to counterparties, who then transfer it to still other counterparties, and so on.
This illusory vanishing act hasn’t made risk disappear: rather, it has set up a line of dominoes waiting for one domino to topple. This one domino will proceed to take down the entire line of financial dominoes.
The 35% drop in the price of oil is the first domino. All the supposedly safe, low-risk loans and bets placed on oil, made with the supreme confidence that oil would continue to trade in a band around $100/barrel, are now revealed as high-risk.

In recent years, Wall Street has been transformed into the largest casino in the history of the world.

Most of the time the big banks are very careful to make sure that they come out on top, but this time their house of cards may come toppling down on top of them.

If you think that this is good news, you should keep in mind that if they collapse it virtually guarantees a full-blown economic meltdown.  The following is an extended excerpt from one of my previous articles…

For those looking forward to the day when these mammoth banks will collapse, you need to keep in mind that when they do go down the entire system is going to utterly fall apart.

At this point our economic system is so completely dependent on these banks that there is no way that it can function without them.

It is like a patient with an extremely advanced case of cancer.

Doctors can try to kill the cancer, but it is almost inevitable that the patient will die in the process.

The same thing could be said about our relationship with the “too big to fail” banks.  If they fail, so do the rest of us.

We were told that something would be done about the “too big to fail” problem after the last crisis, but it never happened.

In fact, as I have written about previously, the “too big to fail” banks have collectively gotten 37 percent larger since the last recession.

If those banks were to disappear tomorrow, we would not have much of an economy left.

Our entire economy is based on the flow of credit.  And all of that debt comes from the banks.  That is why it has been so dangerous for us to become so deeply dependent on them.  Without their loans, the entire country could soon resemble White Flint Mall near Washington D.C….

It was once a hubbub of activity, where shoppers would snap up seasonal steals and teens would hang out to ‘look cool’.

But now White Flint Mall in Bethesda, Maryland – which opened its doors in March 1977 – looks like a modern-day mausoleum with just two tenants remaining.

Only a couple of cars can be seen in the parking lot, where well-tended shrubbery appears to be the only thing alive.

I keep on saying it, and I will keep on saying it until it happens.  We are heading for a derivatives crisis unlike anything that we have ever seen.  It is going to make the financial meltdown of 2008 look like a walk in the park.

Our politicians promised that they would do something about the “too big to fail” banks and the out of control gambling on Wall Street, but they didn’t.

Now a day of reckoning is rapidly approaching, and it is going to horrify the entire planet.