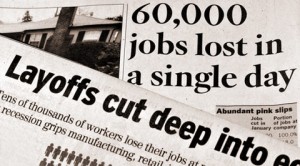 The overwhelming majority of Americans have no idea how our economy works and will be totally wiped out when the economic storm strikes again, which is inevitable.  Our financial system is extremely vulnerable and people are just unprepared for things they can’t foresee.  Americans tend to trust that their leaders know how to manage the economy and can fix problems before they become disasters.  The majority of Americans live paycheck to paycheck without setting anything aside.  They’re not buying emergency supplies of food and water and they’re not investing in gold and silver.

Less than a decade ago, in 2008, our financial markets were blindsided by the mortgage crisis and markets crashed.  Americans lost their jobs by the millions and because they were stretched thin already, they couldn’t stave off foreclosure and so lost their homes to the banks and financial institutions.  Now, just eight years later, people have forgotten and somehow seem to think it won’t happen again.  Preparing for the worst is not a priority anymore and people have turned a blind eye to the fact that the signs are already starting to appear that our financial markets are on the verge of another collapse.  People who have not learned the lessons of the past and have not prepared for this will be very regretful.

The 14 signs that indicate most Americans will be completely wiped out when this happens are as follows:

You may be living a very comfortably these days, secure in your middle-class lifestyle, but this may not last.  If you’ve watched the news lately you know what is going on in Greece.  The economic situation there has gotten so bad recently that many middle-class families are now living in poverty and are unable to even feed their children.  They’ve had to leave them at orphanages just so they’ll survive.

Greek children by the scores are being left at care homes and orphanages because their parents can no longer support them.  One Greek charity reported that of the 100 children in its residential centers, 80 were there because of their parents’ newly impoverished financial situation.

In Greece, teachers are cancelling recess and PE classes because the children are malnourished and don’t have the energy to play.  Teachers have seen their pupils going through garbage cans looking for food.  They estimate that 10% of their students are going hungry.

President Obama and Ben Bernanke (now Janet Yellin ) have kept everything under control in the recent past, but I’ve long since stopped trusting politicians and economists and prefer to prepare for the inevitable economic collapse.  I hope you’re preparing as well.