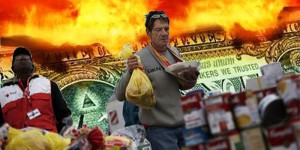 One of the things we point out in our free survival gear guide is that, if the government is preparing for a collapse, shouldn’t you?

I know you know the answer to that question.

Of course you should!

But what you may not realize is that the government is, in fact, preparing for a collapse.

Check Out How The U.S. Treasury Is
Prepping Its Employees For A Collapse…

As just one example, last month the Office of the Comptroller of the Currency asked suppliers for bids on survival kits for every single one of their 3,400 employees, including:

You’ve got to wonder: what exactly does the government think might happen to its employees?

The Government Isn’t Ordering Survival Kits For YOU, Are They?!

In the case of a national disaster, you’d better realize that you’re on your own!

You’re NOT going to be one of the government employees who has already been taken care of.

You’re going to be among those lining up for hours waiting for a granola bar and a blanket so you can shuffle back to your 6×6 plot in “tent city” you now share with hundreds (thousands?!) of other desperate, unprepared, starving citizens, praying that they don’t steal your own rations or harm your family (like in Katrina’s Super Dome)

No, I take that back.

You know better than that.

Grab our free survival gear guide now and put it to use right away.

Because the government is already taking care of its own.

You need to take care of yours.