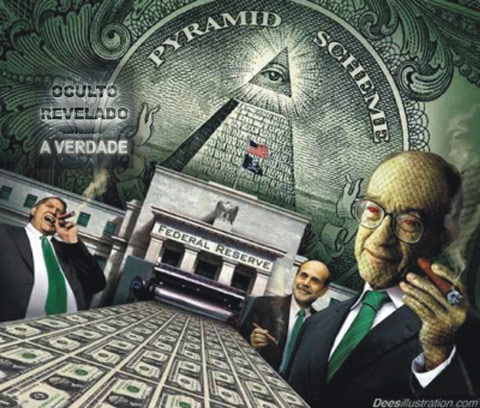 This article was written by Brandon Smith and originally published at his Alt-Market.com website.

Editor’s Comment: By design, America is going down. But the nation’s dumbed-down population is slow to catch on to the subtle mechanisms of control that have allowed the Wall Street 1% to completely dominate all other aspects of the economy, and usher in controls on every transaction made in the digital world.

If it were a movie plot with scary music things couldn’t be more twisted. As Brandon Smith notes, the Fed was set-up to destroy the U.S.

There seems to be a collective delusion within certain parts of the liberty movement that the “globalists” (the banking and political elites that promote total global centralization of finance and power) are a purely American or Western problem, and that they have some kind of loyalty to the success, or perceived success, of the U.S. “empire.” This is nonsensical when you look at the progression of the American fiscal system after the Fed was established over a century ago.

In the past 100 years, the U.S. has suffered a gradual but immense devaluation in the dollar’s real buying power. We witnessed the first long-term fiscal depression in the nation’s history. We saw the removal of the gold standard. We saw the dismantling of the greatest industrial base in the history of the world. We have struggled through the implosion of the derivatives and credit bubble, which Fed officials have openly admitted responsibility for. And now, we are on the verge of the final implosion of a massive equities bubble and the collapse of the dollar itself.

All of these developments require careful planning and staging, not recklessness or random chance. Free-market economies tend to heal and adapt over time. Only constant negative manipulation could cause the kind of steady decline plaguing the U.S. ever since the Federal Reserve was forced into being.

The Fed has had multiple opportunities to strengthen the economic lifespan of America, but has ALWAYS chosen to take the exact opposite actions needed, guaranteeing an inevitable outcome of crisis. The goal of internationalists and international bankers is to acquire ever more centralized authority, and thus, ever more centralized power. The U.S. is an appendage to the great vampire squid, an expendable tool that can be sacrificed today to gain greater treasures tomorrow. Nothing more.

But this reality just does not seem to sink into the skulls of certain people. They simply cannot fathom the idea that the Fed is a saboteur. Not a bumbling greed fueled monster, or even a mad bomber, but a careful and deliberate enemy agent with precise destruction in mind.

Case in point; the recent institution of the Fed rate hike program. No one really gets it and no one is asking the right questions. Why, for example, did the Fed begin raising rates in December? No one asked them to take such measures. Certainly not day traders in the market casino; they were too busy enjoying the fiat inflation of biggest equity bubble in the encyclopedia of humanity. The politicians weren’t demanding any drawback of Fed stimulus, they were too busy enjoying the fraudulent recovery afforded by the recapitalization of too-big-to-fail banks. So, again, why bother promoting rate hikes that are essentially guaranteed to cause a market crisis?

Some might argue that the Fed must raise rates slightly so that they have room to cut them again when their stimulus schemes eventually fail. This is certainly possible, however, such an action only reinforces the position that the Fed is deliberately undermining the U.S. system. To hike rates now only to then cut them immediately after would result in the end of faith in the central bank’s ability to administer our financial structure. A crash would occur regardless.

I do not believe the Fed intends to cut rates again, at least not until it is already too late to stall a full spectrum breakdown in stock markets. Even though the majority of analysts, mainstream and independent, hold the position that the Fed is unlikely to raise rates for a second time (or ever again), I am not convinced that this is the plan. The question remains — why begin raising rates at all if the goal is not to bulldoze forward and squeeze the U.S. economy?

As I wrote in my article “The Global Economic Reset Has Begun,” the Fed has a habit of doing exactly what it says it is going to do.  They may fool the public as far as the exact timing of policy changes, but they never back away from the policy changes themselves.  I cannot find a single instance in the history of the central bank in which they announced future measures and then didn’t eventually follow through within the year.  This is how I predicted the first rate hike in December of last year, and it is why I believe another rate hike is coming this summer.  Fed officials today have been adamant that at least two more rate hikes will be initiated in 2016. If they do not enact these hikes, it will be the first example that I will have witnessed or seen in research in which they “backed off” completely from a policy initiative.

Some analysts argue that this makes no sense. The Fed has spent the better part of the past eight years trying to keep equities markets alive. Why would they now risk crashing the same markets with rate hikes that will cut off corporations and banks from cheap or free overnight loans? Why would they strangle the steady stream of stock buybacks that have been supporting the markets for the past few years? Why risk the fragile rice paper psychology of the markets?  Why would they kill the “golden goose”?

As the recent jobs report from the Bureau of Labor Statistics shows, our fiscal foundations are crumbling and eventually, the fundamentals of our economy will overwhelm central bank orchestrated optimism anyway. Keep in mind, the report of only 38,000 jobs added in May does not paint the full picture of the unemployment problem in America.

The BLS and the mainstream media consistently gloss over the REAL job loss statistics including U-6 measurements which indicate that more than 664,000 working age Americans were removed from unemployment rolls and are no longer “counted” as jobless. This brings the grand total number of workers without jobs or that are underemployed to nearly 95 MILLION! The BLS ignores these people in their primary calculations for the national unemployment rate, which magically dropped again last month to 4.7 percent.

While the “official” jobs numbers are bad enough to cause concerns among mainstream traders and economists, the real numbers are far worse.

Nearly every base economic indicator globally, from raw materials demand, to manufacturing and exports, to corporate earnings, to retail sales and employment are printing negative this year.  Despite all of this, markets remains levitated (for now) because the insane assumption within the mostly inane world of stocks is that bad economic news ensures the fed will bow to market forces and support the equities bubble for another quarter.  When the entirety of investment markets embraces a singular assumption, when the markets has “no doubts”, this is when bad things happen.

I have to laugh when I hear the claim that the Fed “cannot raise rates” in light of the new data. The fed is not “trapped”; rather, it is the U.S. economy that is trapped with the Fed as the instigator.  Obviously, the Fed was well aware of the real unemployment problem as well as numerous other negative data when they hiked rates the first time in December. So, let’s just say it plainly — The Fed is NOT dependent on data when making its decisions. The Fed does whatever it wants to do whenever it feels like doing it, and it is very likely that Fed policy decisions are made months in advance, while publicly scheduled policy meetings are designed just for show.

They may claim that they care about the latest dismal jobs report, or other detrimental fiscal developments, but they don’t. They have their own agenda and their own data points, many of which we will never be privy to.

I would also mention the fact that the Fed has raised rates during recessionary economic conditions on several occasions, including during the onset of the Great Depression; a move which Ben Bernanke later publicly admitted was the ultimate cause of the prolonged depression event. You can read my analysis of this in my article “What Fresh Horror Awaits The Economy After Fed Rate Hike?”

With May’s job report so negative even with all the BLS manipulation, it is presumed that the Fed will not hike rates again at their June meeting. I believe that the Fed is certainly capable of raising in June. The timing of the meeting, right before the vote in the UK on the Brexit referendum, is perhaps not a coincidence.

While I understand the argument that the Fed would be “better off” taking its time and raising in July or September, I want readers to entertain another possible scenario for a moment. Imagine if the Fed raised rates in June to everyone’s shock and surprise. Market turmoil is almost a guarantee.  A hike in June BEFORE a Brexit event would also be easier to rationalize to the public than a hike after a Brexit event.

Imagine then that, again, to everyone’s shock and surprise, the Brexit vote is successful and the UK leaves the European Union (a supposed black swan that the IMF has warned will cause a global equities crisis).

At this point, who gets blamed for the resulting equities crash? The Fed? The citizens of the UK? Who? If the globalists wanted to trigger the next leg down in the global economy, I can’t think of better circumstances or a better smokescreen.

I also acknowledge the possibility that only one of these events might be necessary to increase market turmoil. But from the perspective of an evil-minded internationalist, wouldn’t it be spectacular to have both? I could be wrong, but it is something to think about…

If you want answers to questions on why the Fed takes the risks it does, or why internationalists engineer crisis events, I suggest you read my article “The Economic End Game Explained.” Suffice to say, the Fed serves the interests of globalists and Fabian socialists, not the interests of America as a nation, and the globalists know that chaos is the best method for influencing populations to accept a “new order.” I would also say that they are pulling the plug simply because this year is most opportune.

I don’t pretend to fully understand every detail of the timelines of globalists and the motivations behind them, but I do know that the evidence shows they have such timelines, and according to recent actions the clock appears to be running out.