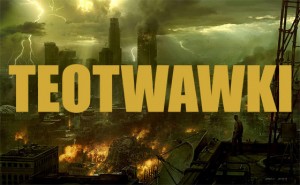 There are some who prepare for TEOTWAWKI (the end of the world as we know it) with the full expectation that it will happen – that one day they will be able to pull out all their preps and implement their survival plan. And when it doesn’t happen (hasn’t happened yet), some actually feel remorse, regret, invalidated, even ‘disappointed’?

Is this you? Which side of the fence do you visualize yourself? Let’s hear some of your examples how you may be currently using your preps or have found circumstance to use them even though the proverbial collapse has not happened yet…

I guess I’ll start it off with a few of my own examples.

Regarding our food storage (including my long-term food storage), we actually eat it instead of storing it and waiting for ‘that day’. We have organized an effective organization and food rotation plan whereby we are consuming what we store (and then replacing it with new). First in, first out. Everything. Even the buckets of wheat berries (we make our own bread from milling the wheat into flour). Even the dry beans and rice (we regularly eat them and replace them in some of our weekly meals). Even some of the long-term #10 cans of various freeze-dried and dehydrated foods – we’re starting to consume some of them which we purchased many years ago. We regularly rotate through all of our grocery-store-bought cans of food so that none of them are more than 2 years old. In this way, we will never have ‘wasted’ our money and time spent on food storage, even if TEOTWAWKI never happens.

Another example is the money and time spent on an alternative energy source (e.g. my solar PV system). While my current project is not yet complete, I intend to utilize all of the available alternative energy in my home real time – even though from a purely financial standpoint the ‘break even’ investment payback date is seemingly unreasonable into the future. I will have a steady and ‘free’ source of electrical power into the foreseeable future, and if the power ever goes out from any number of ‘typical’ causes (storms), my critical electrical systems will not be affected. If we ever experience a grid collapse I will be in good shape. If it never happens, I will still benefit from ‘free’ power during my day-to-day life.

I recall one day several years ago when we were living out West – we lost power during a bad storm one night. As it turned out, a very large tree had fallen on a nearby house (destroying it – although miraculously no one was hurt) and tore down power lines and pole transformers. The power was out for nearly 24 hours if memory serves (they didn’t have an immediate replacement for the two needed transformers). I did have a solar PV system installed at our location and had enough power to operate the refrigerator, chest freezer, lights, my PC and some other things around the house. We also utilized our solar oven that day while preparing a meal (why does food always taste better under these conditions?

). That said, we use our solar oven whenever possible, given a nice sunny reasonably warm day. We don’t just let it sit somewhere collecting dust, even though it is a ‘prep’.

Generally speaking, when deciding on what I might need for preparedness (a tremendously wide subject), I look upon preps as lifestyle tools. Not just something that I’ll put in a closet and shut the door. Though there are some things which are very specific and purposed towards something which may not be normally utilized day-to-day, my general goal is to always be moving towards more self reliance and less dependence upon external systems. A lifestyle. While it’s nearly impossible to become truly self reliant, the fact is that the more we are, the better off we’ll be (today AND ‘if’ TEOTWAWKI happens).

What are your examples having used preps without having to wait for TEOTWAWKI?