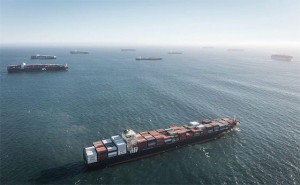 The nearly invisible world of container ship cargo freight shipping – the container ships that dot the oceans as part of a global supply chain – goes unseen by the American public (and others). The public at large do not realize that it is very much an underpinning of our modern civilization, and therefore a strategic and very dangerous weakness.

We have not been a manufacturing nation for many decades (compared to what we once were) and for the most part we cannot support ourselves – we no longer produce.

Instead we ‘buy’. Because we buy, others must ship (to us). Without shipping, our grocery store shelves would go bare, we would have no clothes, we would literally run out of much of our modern life-sustaining supplies. Our civilization would not work.

You may have heard snippets in the news about it, but there is an ongoing critical major slowdown of container cargo ships from entering our major ports on the west coast – and they’ve been sitting offshore for weeks while offloading has slowed to a trickle. If you have any inclination about ‘JIT’ (Just In Time) manufacturing and distribution, this situation has the potential to break it.

Having read a recent article (h/t ‘cossack55′) by Dave Hodges who believes that this may go critical within days, my own opinion is that if this goes on for much longer, many more of us will begin to feel the effects – perhaps by way of some shortages in the marketplace.

It’s anyone’s guess as to how quickly a domino effect could happen, and however long it might take to actually ensue ‘panic buying’ of sorts (emptying shelves would provoke more buying), but at a minimum it will likely reveal a bit more about our systemic risk to JIT as well as our reliance on much of our food and nearly all of our other supplies and many commodities coming from foreign nations by way of container cargo ships.

Don’t think for a minute that we could survive on our own without these container ships supplying us with our ‘stuff’.
Apparently the surface issue is an ongoing contract dispute between the International Longshore and Warehouse Union and the Pacific Maritime Association, which represents terminal operators. While there has not been an actual strike (which would likely trigger federal intervention), the work has slowed enough to cause massive backups across the oceans – affecting supply chains across the globe and costing the economy billions.

Some believe there is an underlying additional sinister element to all this – surrounding Obama’s apparent trade goal to stealthily implement something called TPP (Trans Pacific Partnership) among member nations – apparently along with 600 corporate officials who form the TPP panel. Obama is reportedly leaving the US Congress ‘in the dark’ and not allowing TPP documents to be accessed when they’ve been requested. Some believe that the effects and ramifications of the TPP trade agreement policies will effectively strip away more of our constitutional rights as a result of its apparent architecture while placing more power in the hands of the global corporate entities which have been in effect taking over our governments.

How is Obama leaving the congress out of it?

President Obama is indeed seeking Fast Track Trade Promotion Authority for the TPP as he feverishly attempts to get the deal done by the end of the year.

The REAL reason that the cargo container ships are backed upon our ports is because the TPP and Obama is holding all the parties hostage until they get what they want, the fast-tracking approval which will allow Obama to completely ignore Congress in regard to allowing Congress to fulfill its statutory duty in approving all trades.

Obama, on behalf of the TPP wants to break the unions and all power of any ancillary support group, which is why we are seeing products backed up in our ports. Under such an agreement, this would permit Obama to sign the trade agreement “without Congressional approval.”

We are living in interesting times indeed…