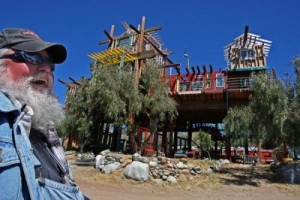 Living off the grid could land you behind bars in California. Government officials are using nuisance abatement teams to force property owners off their land. Some of the self-reliant Americans featured in a Reason TV expose were offered the chance to stay in their homes, but only if they could pay an enormous fee and hook onto the power grid.

Living in a rural region that does not have a zoning, code or building permit office, I was shocked to discover all of the governmental red tape (and control) other Americans are forced to endure. The dozen or so off-the-grid property owners residing in the deserts around Los Angeles County feel as if they are being targeted and terrorized by local officials, and I tend to agree.

The code enforcement agents pressuring the off-grid home owners away from their land are reportedly citing complaints by neighbors about the non-traditional homes. As many of the self-sufficient folks featured in the report note, their closest neighbors are at least a half a mile away. It is unlikely that an Earth-friendly, off-grid energy systems is truly ruining the view from such a distance.

Claims that a future and potentially lucrative land development deal is behind the government overreaching tactics have been dismissed as conspiracy theories by local officials. Some of the California desert residents stated they have been threatened with both massive fines and jail times if they refused to follow the dictates of the nuisance abatement teams.

Many of the “desert rats” believe Los Angeles County Supervisor Michael Antonovich is behind the infringement upon their property rights. Antonovich created the nuisance abatement teams in 2006. The stated mission of the permit enforcement teams involves abating the “more difficult” public nuisance conditions and code violations present on private property.

Once again, the fact that door size, electrical outlet placement rules, and the like even exist is beyond comprehension for me. If I wanted to build a house on a piece of land, I could simply grab a hammer and begin the process. Aside from a few health department regulations about sewage and wells, no contact with any governmental agency is required. My friend Cindy, the county auditor, makes sure accurate property taxes are levied, but other than that, we all live peacefully in houses which are no more prone to fire or collapse than those in the highly over-regulated cities quite a few miles down the road.

The ramped up land usage code enforcement in the Los Angeles desert region has reportedly been going on for the past five years. Agents from governmental offices have essentially been rendering the off-grid residents homeless in many cases. Lacking the funds to legally address the unreasonable fees, fines, and power grid requirements have left many of those who have been visited by agents without the ability to fight for their rights. The only tool many of the off-grid desert families have been able to utilize has been the power of the media. Only recently have various local and online media outlets taken notice of the property infringement tactics and begun to shed light on the problem.

One Antelope Valley resident had been living on his little patch of sand for over two decades without any type of government intrusion—until recently. Once he began receiving letters stating his home site was bothering his neighbors, the situation started to go downhill quickly. A video tour of his property clearly illustrates that the only “neighbors” the man has are sage brush and jack rabbits.

An older couple, Marcella and Jacques Dupuis, were reportedly forced to dismantle their home by hand and then use their retirement funds to buy a home in another county. They could not afford to hire a work crew or heavy equipment necessary to complete the ordered removal any other way. The couple had also lived in the same spot without problem for over 20 years. The Dupuises reportedly applied for a building permit after purchasing the land and always paid their annual property taxes.

“They wouldn’t let me grandfather in the water tank. It is so heart-wrenching because there was a way to salvage this, but they wouldn’t work with me. It was, tear it down, period,” Jacqeus Dupuis said.

During one visit by the abatement and enforcement team, Marcella was required to show her identification when agents came onto her property and looked around without a warrant or prior communication about an inspection. When she stepped out of their humble off grid home, she was understandably startled to be met with agents with drawn guns.

A man identified as Kenny moved to Los Angeles’s desert region to escape the crime initiated by gang members in his city neighborhood. Kenny restores old cars and had multiple vehicles damaged and vandalized at his old residence. He was living out his dream of a peaceful and crime-free existence until he too began getting letters and visits from L.A. County officials. One of the violation letters he received reportedly stated that an outbuilding did not meet road setback requirements. He moved the building even though it sat off a private street and not a county road.

Alan Kimbel “Kim” Fahey recently lost a battle in Los Angeles Superior Court over his whimsical “Phonehenge” property. Fahey had crafted a rather eclectic home from reclaimed telephone poles. During the criminal case he was told that he did not have the proper permits to build the home and therefore he must tear it down.

A six-week investigation into the off- grid homes battle by L.A. Weekly revealed that investigators are energetically pursuing “victimless misdemeanors and code violations.” According to the report, the government can deem land that has been used as a homestead for years vacant if the mobile homes and cabins on the property have not been “legally established.”

The land development backroom deal alleged by the off-grid home owners may have been cavalierly dismissed as a conspiracy theory, but seems to have quite a bit of merit. Most of the self-sufficient homes were built many years ago. Why is there such a push to wipe them out of existence now? Regardless of the reasoning behind the pressure to thwart the off-grid spirit in Los Angeles County, the self-reliant residents should not be treated like criminals or forced to use all of their savings to fight to maintain their property rights.

2 thoughts on “Are You A Target If You Live Off-The-Grid?”