Why do you need a light on your gun? Because it gets dark! Seriously though, depending on the time of year, there may be more hours of dark than daylight.  It’s a safe bet you’re going to find yourself in the dark at some point. Even during the day, unlighted buildings can be darker than night.

Most of the time we have the advantage of good lighting indoors, and some from street lights, car lights, and so forth. The problem is, as soon as you don’t have a source of light, you’ll wish you did. If you have to use your gun you’ll be shooting in the dark, literally and that’s not good.

Why not just carry a flashlight with you? If that’s all you have it will certainly be an advantage over no light at all. It can be more versatile than a light attached to your gun. But there’s several reason you should consider outfitting your firearms with a light, and here’s why; 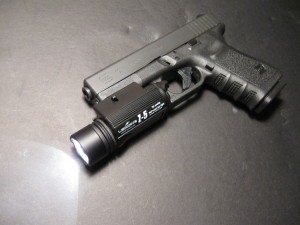 Unless you literally carry your flashlight on your person, you don’t really have one. Even sticking it in a jacket pocket doesn’t cut it. If your light is in your coat pocket that’s hanging on the back of a chair and you leave the room for a minute, you don’t have a light. If you carry a top of the line LED light in your go bag, and it’s sitting in your car, you don’t have a light.

Just as the number one advantage to a handgun is that you can carry it everywhere day in and day out, a weapon-mounted light is always there when you need it most. 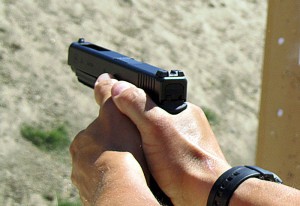 We’ve all seen and probably trained with the different techniques used for holding a flashlight while using a handgun or long gun. All these methods limit grip on your firearm, and let’s face it: They’re better suited for someone with three hands, or long alien fingers. They work if necessary, but are far from ideal. Remember, those techniques were developed long before anyone realistically considered mounting a light on their gun. The technology just didn’t exist.

Nowadays, we have the advantage of small, lightweight illumination options. A light mounted on your gun frees up both hands so you can operate your firearm at the highest level of proficiency possible. That’s a big advantage, especially when we’re talking about long guns. A handgun can be used pretty well with only one hand. A rifle, carbine, or shotgun is another story.

#3: You Only Have Two Hands

Say you’ve trained to use a stand-alone flashlight with your guns. Have you done this while navigating a building? This is a challenge even in your own home where you may be opening or closing doors, or perhaps carrying something else such as a pack or other gear. It’s a whole new ball game, and at the very least a big pain in the butt. This is especially true if you have to disengage from your light/gun combo while opening a door to check a room. You want to be ready to address any threat that may be in the room, but if you have to re-acquire your gun/light setup, you won’t be ready.

#4 It’s As Safe As The Operator

Some may object to a weapon mounted light based on misuse or safety concerns. That can be a legitimate point, but it’s easily addressed with correct methods of use. Just because you have a light on your gun doesn’t mean you’re going to go around pointing your gun at anything you need to see in the dark. This would be ridiculous.

A weapon mounted light is a specialized piece of gear. It’s on the gun because it’s supposed to be used in conjunction with the weapon. And since you don’t go around pointing a gun at random things, the same goes for a light stuck to it.

Even when you are using the light to clear a room, for example, you can hold your gun at a ready position and illuminate space in front and to each side of you. This means you’re not indiscriminately muzzling everything. And of course, your trigger finger is off the trigger in the “safe” position while doing this, and until you need to fire your gun.

All things considered, I think it’s worth looking at installing a light on your gun. It can greatly enhance your ability to use your gun effectively when the time comes.