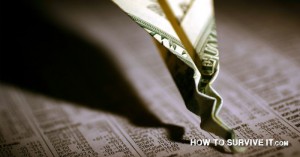 I am one–hundred percent convinced that a dramatic and negative change in our economy will happen very soon. Quantitative easing, over-inflated home and student loans, and a stock market built on nothing but hopes and dreams are certain to bring a collapse of the U.S. economy.

We’ve watched inflation continue to climb, seen the stock market repeatedly crash, and stood by as the housing bubble decimated our economy. Those in government and other positions of power made the decisions that led to these problems, and they continue to do so, bringing us closer to economic collapse every day.

Bankers, stock brokers, and other financial types won’t be of much use when our economy collapses. Sales people, especially those who market luxuries, won’t have many opportunities when prospects don’t even have enough money to put food on the table. And employees in industries that depend on discretionary income, such as restaurants, spas, and gyms will suffer massive layoffs as people tighten their belts.

The only way to survive an economic collapse is to prepare beforehand with a plan consisting of two simultaneous phases.

Phase one is to stock up on barter items, weapons to defend your family, and a supply of food, water and medical supplies.

Phase two is to develop skills that others need that will allow you to support your own family, such as:

There are literally hundreds, maybe even thousands of options. Most are not glamorous, but all are necessary. You just have to think about what will be needed when the economic system we’re accustomed to falls apart. Think about the skills and knowledge that your grandparents, great grandparents, or even people in today’s poor countries need to survive. You will need to acquire the same skills and knowledge to survive and economic collapse.

Was this info helpful? Share it with your friends!