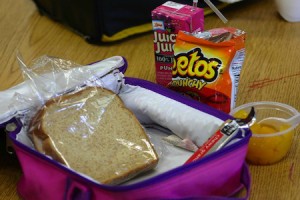 A while back, I posted a series of pieces on why and how you should protect your food for the long-term.  I suggested ways to get rid of pests and keep out oxygen and light so that the food would remain viable and nutritious for longer periods of time.  The main way I proposed was by sealing the food in Mylar bags and then placing them in plastic buckets with tight fitting lids.

A reader named Heather who is new to prepping asked me more questions about what to store.  She had a very interesting idea about storing food in a way I had not considered-  by the week’s worth rather than by similar contents or purchase date.  My interpretation of her original question was “What should I put in a bucket to feed my family for a week?”

Hmmm…  I gave it some thought and looked around online, but couldn’t find any other people who had posted information about doing that.

I began by making lists of various types of storage foods that could be used for each meal of the day.  Then I started thinking about how much of each ingredient would be needed for the “average family of 4.”

Before long, I came to the conclusion that this was a pretty hard proposition.  I had to decide if I was going to stick with one space-efficient item for each meal (like oatmeal for breakfast, tuna for lunch, etc.) or whether I needed to provide variety.

How many days of oatmeal would people eat before they’d rather pass on breakfast?  Well, what if I provided different flavorings to add (cinnamon and brown sugar, dried blueberries, etc. sealed in small Mylar bags)?  How much would that add to the cost and how much space would I sacrifice?

Then I came to the quandary about water.  Do I assume that the possessor of the bucket has clean water or does it have to be part of the bucket’s supplies?  After all, these are mostly dried foods so they need water to cook or reconstitute, plus the water needed to drink.

In the end, I came to the conclusion that, in most cases, it would be very hard to put many days’ worth of food into one bucket unless you were willing to sacrifice variety (this is survival not vacation, right?) and water would have to be provided or stored elsewhere.

I was intrigued by the idea still, though.  I have long been concerned that we will have more people show up here hoping to move in than we can possibly handle.  I’ve been sick thinking about having to turn people away, especially if they have nothing.  This seemed like a possible solution.  I like the idea of being able to at least hand them a bucket of provisions that would help get them to their next destination.  To the food in the bucket, we could add some items from our Barter Larder like a multi-tool/knife, matches, skillet, and so on.

In addition to these charity buckets, the idea could be adapted to organize meals for a bug-out situation.  If I think there is the possibility that we may have to leave for some period of time (wildfire risk, radiation plume, etc.), then I could grab these specially prepared buckets and know that we have X number of days of food already organized.  Depending on the number of people in my group, I may be able to fit more than one day’s worth of food per bucket.  My other bug-out preparations would need to include the cooking vessels and water, but we would not be doomed to 18 straight meals of Ramen noodles or granola bars.

So, here is what I thought of for the first couple of days:

Extra– If it’s possible to bake, I’d like to include ingredients to make at least two loaves of bread.

Breakfast–  Powdered scrambled egg and bacon mix, plus a small jar of jelly to go on bread made the day before

Do you have any ideas about other “menus” that could be put together or more useful ways to package food in the buckets?  Any thoughts on what should or should not be included (besides accounting for special dietary needs, like being gluten-free)?  Please mention them in the comments section below.